‘This is such an original and brilliant read! Powerful, feminist, and with such incredible imagery, I’ve honestly not read anything else quite like it. Love, war, ambition, power and an overwhelming compulsion to take down the patriarchy and set right infinite wrongs; this is a contemporary transformers-style fairy tale steeped in Chinese history with a kick-ass heroine. I really hope there will be a sequel. It’s possibly suitable for older teens but there are some disturbing adult scenes (rape, torture).’

Instant New York Times No.1 Bestseller Science fiction and East Asian myth combine in this dazzling retelling of the rise of Wu Zetian, the only female emperor in Chinese history.

‘This is the historical-inspired, futuristic sci-fi mash-up of my wildest dreams.’ Chloe Gong

‘Raging against the patriarchy in spectacular style.’ Observer, best books of the year

‘Like its ferocious heroine, Iron Widow is brutal, bloodthirsty and full of rage.’  Julie C. Dao

I have no faith in love. Love cannot save me. I choose vengeance.

The boys of Huaxia dream of the celebrity status that comes with piloting Chrysalises – giant transforming robots that battle the aliens beyond the Great Wall. Their female co-pilots are expected to serve as concubines and sacrifice their lives.

When 18-year-old Zetian offers herself up as a concubine-pilot, her plan is to assassinate the ace male pilot responsible for her sister’s death. But on miraculously emerging from the cockpit unscathed after her first battle, she is declared an Iron Widow – the most feared pilot of all.

Now that Zetian has had a taste of power, she sets her sights on bigger things. The time has come to stop more girls from being sacrificed.

Xiran Jay Zhao (they/ them) is a first-generation immigrant to Canada from small-town China (which, for China, means a town of 4 million people). A recent graduate from Vancouver’s Simon Fraser University, they wrote sci-fi and fantasy books while they probably should’ve been studying more biochemical pathways. You can find them on Twitter @XiranJayZhao for daily shitposts, Instagram as xiranjayzhao for cosplays and very extra outfits and YouTube as Xiran Jay Zhao for videos about Chinese history and culture. Iron Widow is their first novel.

‘A ferociously original fusion of Chinese history and mecha sci-fi, this is a fast-paced thrill-ride.’

‘Absolutely epic. This is the historical-inspired, futuristic sci-fi mash-up of my wildest dreams.’

‘This wild anime-inspired reimagining of the biggest, baddest figures in Chinese history takes on the patriarchy and smashes it – with giant robots. Think The Handmaid’s Tale meets Pacific Rim and buckle up.’

‘Like its ferocious heroine, Iron Widow is brutal, bloodthirsty and full of rage. Zetian’s fight to shatter patriarchal definitions of power makes for a truly thrilling read.’

‘In new publishing, fantasy with strong feminist themes dominated. Raging against the patriarchy in spectacular style is Iron Widow (Rock the Boat), in which Xiran Jay Zhao reimagines the life of China’s only female emperor in a fusion of history and sci-fi action.’

‘A primal scream of a book, Iron Widow delivers on all that fury and more, combining meticulous pacing and brilliant world building to make a truly epic read.’

‘Zetian is the take-no-prisoners heroine you’ll love to cheer on as she crushes everyone who tries to bring her down.’

‘A bold and brash story that will grab you by the throat from page one. Zhao expertly weaves a story that polishes off classic sci-fi themes and re-imagines them in a lush futuristic world inspired by Ancient China. With an unapologetic heroine who pushes so far beyond the boundaries of expectations, the reader will go on a journey of twists and turns that will make them gasp with each page turn. Thrilling, heart-wrenching and epic!’

‘In Iron Widow, Zhao crafts a thrilling, brutal tale with jaw-dropping action and a fierce and unyielding heroine. Zetian is unstoppable, and I dare you not to cheer her on.’

‘Iron Widow is a gut punch from the very first pages. The action is riveting. The story relentless. The heroine ruthless and unapologetic. Zetian is here to set the world on fire, and her pursuit of vengeance is thrilling and empowering to behold. Sit back and enjoy the show – and stay the hell out of her way.’

‘A searing, cinematic, gut-punch of a tale, Iron Widow is both wickedly fun and brutally incisive when it comes to the Chinese history and culture it draws inspiration from. There’s no resisting Wu Zetian; once she sinks her claws in you, you’ll be racing alongside her to a shocking, subversive end.’

‘Zhao has gifted us with this addictive, thrilling chaos, led by one uber-talented female assassin. Interwoven with a rich tapestry of East Asian mythology, this is a unique and piercingly powerful book, which any sci-fi fan will lap up.’

‘A rip-roaring, blade-sharp rampage through a vivid, terrifying world. Never have I cheered on a murderer so hard.’

‘Absolutely phenomenal! Wu Zetian is the badass heroine I’ve been waiting for, taking on aliens and the patriarchy like a total boss. Like a kick-ass feminist Ready Player One — I adored Iron Widow.’

‘Iron Widow is an exceptional book. This is an interrogative, imaginative and endlessly interesting retelling that combines a personal story of revenge with an epic sci-fi world… This is a firecracker of a book.’

‘The characters in this novel are truly spectacular.’ 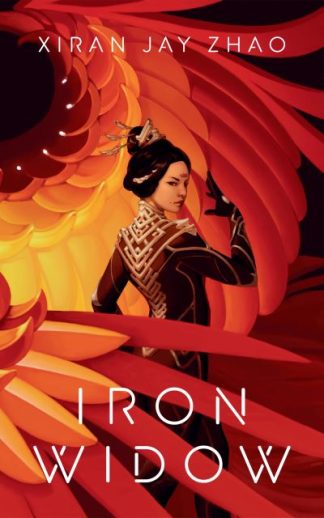